Today's outdoor Wednesday is hosted by Susan at A Southern Day Dreamer. Visit her site to see more outdoors around the world! It's an amazing treat.
Today I want to share with you a bit of history. Below you see an old picture of the Lee Hall Depot. This little building is located just down the road from where I live and for the longest time, before I knew it's history, I used to think it was more of an eye sore. It's run down, boarded up and made the entry into Lee Hall look worse for wear. As I learned about it's history I realized this was a site that needed to be preserved. We read about the future of the depot and learned that the plan was in fact to preserve this bit of history and to do that they would physically move the building to another area just across the tracks where there would be more room for future passengers and visitors. The depot is located only a few feet from the tracks so this new plans is a really great idea.

This is what it looked like when I first moved here, four years ago.

This collage of pictures was taken this week. I wanted to capture the preparation process. We still wonder how in the world they move a building, an entire building so I'm really glad we're not moving until after they move it because I will be there taking pictures everyday they are working. Right now they have separated the main building from one of the additions. That section has been lifted off the ground and placed on wooden blocks...what's next-- guess we'll have to wait and see. 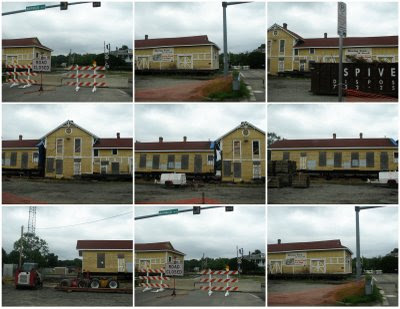 Since we've been here the city has made a plea for donations, received gifts and grants from various organizations and now they are ready to get moving- literally!
Here's a bit of history from their website:

he historic Lee Hall depot was constructed in the 1880s as part of the Chesapeake and Ohio Railroad’s efforts to establish its Atlantic terminus at Newport News, thereby linking the Ohio River Valley with the sea. The station was sited on Warwick Road, now Boulevard, connecting the Warwick Courthouse with Williamsburg and Yorktown.

Traditionally, the depot served the Yorktown, Lee Hall, and lower James City County communities and was the social and economic focal point of the village of Lee Hall that grew around the station.

The depot is the only remaining station on the Lower Virginia Peninsula from the railroad’s expansion into Warwick County. Five stations (Lee Hall, Oriana, Oyster Point, Morrison, and Newport News) once served the county. It is a symbol of Newport News’ early development from the agrarian Warwick County into the modern City of Newport News and of the history of transportation.
The restored depot will provide an area for a light rail transit
stop, a gift shop/admissions area, and two exhibit galleries. The exhibits will include “Lee Hall Village: A Railroad Community” and a children’s hands-on exhibit entitled “Rails Across America.” Both exhibits fulfill the Commonwealth’s Standards of Learning requirements for school-age students.

Additionally, the station will be named to the National Register of Historic Places and Virginia Landmarks Register as it has already been decreed eligible for listing.
Source: The Lee Hall Depot