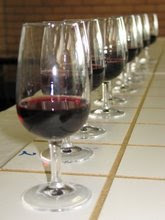 photo by On The Grapevine

As promised, here's a little education on wine:

When Terie and I discussed my contribution to her blog on wine matters, we were in agreement that it should take on a mixed format to include the basics of viticulture and wine making, the various wine varieties and styles available, matching food with wine, wine tasting tips plus any interesting gossip in the world of wine.

Hopefully I can do this in a simple and entertaining way. In no way do I want to turn the whole thing into a series of lectures. Some people take wine very seriously…..way too seriously! But as the doyen of the Australian wine industry, the late Len Evans, once said “Wine is a great drink, but it's a drink, it's the juice of fermented grapes. So just drink the stuff, be quiet and get on with it.” He also once said "Life is too short to drink bad wine” I have always tried to follow his advice.

Most of my wine experience has been in Australia but I have also visited wine regions in Germany, Italy, France, Spain, New Zealand and the USA. I hope all this has given me a broader outlook on the industry worldwide.

Where to start?  Grapes might be the obvious place.  So what are wine grapes and where do they come from?

If you remember your high school biology you might recall those terrible double-barrelled Latin names that all organisms have. Without having to make you seek out your old textbooks let’s just say wine grapes fall under the genus Vitis which in turn are classified by their species.

The ones we are interested in are the European Vitis vinifera and the various American Vitis species.  European grapes include all the well known wine grapes eg. Cabernet Sauvignon, Chardonnay. Merlot etc. as well as table and drying grapes eg. Sultana (Thompson Seedless).

What a lot of people don’t realise is that European grapes are all the same species, they vary simply by variety. It is said there may be about 8000 of which 1000 are used for wine. And just to complicate matters (stay with me on this) each variety can have a number of clones ie. despite being genetically identical they can differ in growth patterns and fruit production characteristics.

Pinot Noir for example is said to have between 200 and 1000 clones! Cabernet Sauvignon around 12. American grapes consist of about 20 species and also numerous varieties. For wine making the American grape Vitis labrusca is the main one used and many people will recognise the varietal names Concord, Isabelle, Catawba, Niagara and Delaware.

However most wine drinkers agree that American grapes do not make the best wine, the main disadvantage being a rather pungent or ‘foxy’ flavour. But the vines do have viticultural attributes eg. disease resistance, so efforts have been made to “cross” the American and European species. These are known as hybrids.  American wine drinkers probably recognise the hybrid varietal names Baco Noir, Edelweiss, Frontenac, La Crosse and Seyval Blanc.

So what is the origin of these grapes?

American grapes are of course native to various regions of North America. European grapes have their origin in Western Europe, Central Europe, Northern Africa and the Middle East. They have been growing wild for some hundreds of millions of years. Domestication is said to have taken place around 3000BC.

Some history here.... focus for a moment:

The first written accounts of grapes and wine can be found in ancient Mesopotamian text from the third millennium BC. There are also numerous hieroglyphic references to wine from ancient Egypt.

The ancient Greeks introduced grape growing and wine making to Europe and then as colonists to southern Italy. The Etruscans further developed these wine making techniques and eventually the Romans took over from there.

Between the fifth and tenth centuries, viticulture was almost exclusively an activity of the different religious orders in their monasteries. The Benedictines and others extended the grape growing limit, within Europe, northwards. Viticulture also eventually became popular with the aristocracy of France as a symbol of prestige.

The rest, as they say, is history.

Email ThisBlogThis!Share to TwitterShare to FacebookShare to Pinterest
Labels: about wine, wine grapes