He just had to try his way first 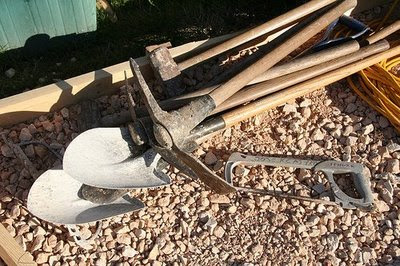 Photo by HighlyCaffeinated
My husband seems to always want to save a penny or two by doing certain things himself. That generally turns into a disaster and we still end up spending the money, sometimes more.  I say let's stimulate the economy and hire someone to do the job.  But no, he has to give it a go first.
Last week we realized that our Oak tree was definitely dead.  It needed to go before the wind knocked into our house because you know that's exactly what would happen if it fell on it's own. Never mind that there's an open field on the other side of the fence.  Anyway, he asked me to call around and get some quotes. My neighbor also said, get lots of quotes.  OK, I get the idea, I'll get quotes.  So I arranged for 4 or 5 different tree service companies to come around and give me a quote with and without the stump grinding.  We had one guy come by and he said the tree was dead (duh...really? Thanks dude) and that it would require a lift because they could not climb a dead tree.  Basically, our tree was so dead that it could fall apart if someone tried to climb it.  He said he would send us a quote.  Never heard back.
No big deal I have a few others lined up, or so I thought.  Another guy came over gave my husband a quote (big mistake) and they singed a contract on the spot.  I was very upset because first, I felt we were getting ripped off.  He was charging us $650 without grinding the stump.  My neighbor's tree was about the same heigh and he paid less.  But he didn't need a lift..OK I get it.  Needless to say, I had to call all the other guys to cancel the quote.  They all told me I was getting ripped off...as if that changed the fact that we had a contract!!!  Yes, it was too late to cancel...you know, the three day rule.
So they came, they took down the tree in a matter of ....well pretty quickly, they left with their check in hand...happy as a well fed pig.  (I have no idea where that came from) anyway, my dear husband, Mike, decided he would take care of the stump.  With a machete, shovel, a wedge, and some other tools he should be able to get it down low enough so it's not very noticeable.
There's a fence behind the tree and it was now cutting accross the stump, needed to be replaced, etc. etc.  He spent a good 4 hours outside trying his best to chip away at the stump, with little results.  In the mean time I called one of my tree guys and arranged to have them come by on Monday to grind the stump...after spending $650 what's another $100 to get rid of the stump? Well, it's way more then we would have spend if I had arranged the whole thing but since Mike made the decision to hire the first guy he had a chance to speak with we ended up spending way more and he spent 1/2 a day outdoors in the heat, wasting his time.
Lessons learned.  If you hire someone to do work, let them do the whole thing and be done with it.   Get quotes!! There are so many tree service companies out there, it is amazing the range in prices they charge.  Shop around.  Evaluate what your time is worth and if it's more than what it would cost to pay someone else, say a professional, to do the work then it's time to call that pro and let them handle the job.
I could go on with all the little things he tries to do to "save" money, and in the end, it costs us the same or more.  He sort of reminds me of Tim "the toolman" Taylor.  Our tree stump will be gone tomorrow; Mike will fix the fence this coming week--yes I do trust he can do that better than anyone else; and then we can move on to other details we need to focus on to get the house ready for the market.
I do appreciate that he tries to help.  We do get to laugh often about his little mishaps and mine, except I don't have as many-- no really, I don't. Hmmmph!
Posted by Unknown at 7:37 PM

Email ThisBlogThis!Share to TwitterShare to FacebookShare to Pinterest
Labels: work around the house