Blue Monday, hosted by Smiling Sally.
Visit her to see what other blues others are sharing today.
Today I am sharing a photo a took when I visited my home, my parents, in the Dominican Republic, several years ago.  I forgot I had taken this picture for the purpose of finding out more about it.  For one thing, I didn't realize there were so many obelisks throughout the world.
Anyway, back to this one.  This is the Obelisco en el Malecon commemorating Las Hermanas Mirabal (the Mirabal Sisters).
These four  women followed their convictions with bravery and selflessness to fight for what they believed. To fight against a dictators rule they felt was wrong. Three of them - Patria, Minerva, and Maria Teresa - gave their lives for their cause.  They were killed savagely by some henchmen following the Dictator Rafael Leónidas Trujillo orders. They were a threat to this commanding man because they were involved with trying to over throw his cruel, ruthless and fascist government.
The story is one of bravery and justice in the end.  Read more about it here. 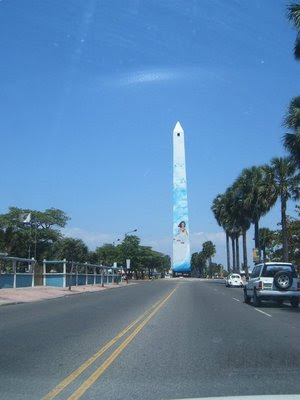 El Obelisco del Malecon in Santo Domingo, is painted with "A Song to Liberty." (by Elsa Nuñez) This 137 foot tall Obelisk, that Trujillo had built to bring honor and recognition to himself, was converted to honor the Mirabal sisters. It is now painted with the three women he had murdered. It was unveiled on March 8, 1997 in honor of International Women's Day.
This is a close up version. 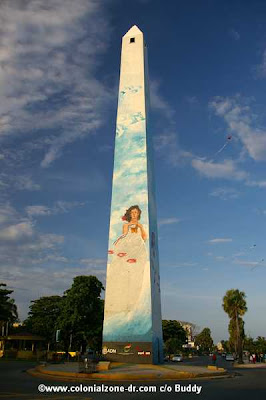