Look for the rainbow 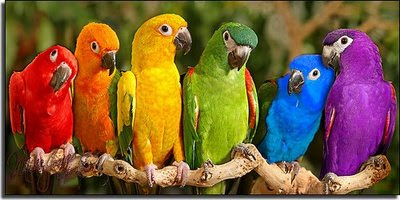 Rainbow Birds by Mike Jones
Yesterday was one of those days I wish I had just stayed home wrapped in a blanket with the phone turned off.  It seems everything was going to go wrong and it didn't help that I felt particularly irritable to begin with.
After completing my household chores, you know the usual stuff (vacuum, dusting, taking out trash and decluttering yet another small area of the house) I felt things were going well.  I had a swim lesson later that day, a date with my husband later in the evening, one kid was gone with grandma, the other was busy "cleaning" her room and the little ones were being angels.
Then the phone rang.  It was a dear elderly lady I sometimes help with a ride to the doctors, the groceries, pharmacy, etc.  Her name is Shirley.  Shirley loves to talk, probably because she spends most of her days alone in her house.  She is not allowed to drive, has had one too many surgeries and has more stories under her hat than I can handle.
She hasn't called in a while and sometimes I feel guilty if I don't call to check on her but I do have a family keeping me quite busy so it is hard to get on the phone for an hour for yet another story. Anyway, she called because she needed a ride to the grocery store.  You have to understand that taking Shirley anywhere means I'll be spending the rest of my day at her beck and call.  I do have plans for my Saturday, can I make this all happen?  I had my doubts, however, I couldn't imagine that poor old woman whose kids choose not to help even though they live within 45 minutes, go without food.  So I called her back and offered to drop her off at the base commissary and she could shop while I ran some errands.  This was a good plan, I jus new it was.
I picked her up with plenty of time for her to cash her check.  No, apparently not.  It took her 22 minutes to cash the darn thing.  I was beginning to doubt my decision to help her.  I dropped her off at the commissary and went on to my swim lesson but I was too late so that didn't happen.  That's OK.  Just means I wont have to do my hair later when I go on my date. I decided she should be done with her shopping, about an hour and a half later so it was time to go pick her up.
I was going on a military installion when the gate guard said "I can't read your tags, you'll have to go get a pass."  Are you friggin kidding me, I thought. "Well that's clearly a nine," I said. "Sorry, I can't see it, it could be an eight or a six, I don't know."  You're an idiot, I thought again. "Well, umm, even if it was an eight or a six, we are currently in month number two." Logic was a bit too much for this guard and the fact that I proved her wrong wasn't helping either.  She quickly called the other guards and they all escorted me to the office where I could get a day pass.  Once there I realized I didn't have the most current insurance card nor did I have my updated drivers license.  The guard said "let me call my manager," I said, that's OK.  I'll go home and get my husband car.  I quickly left that site driving down the wrong way on a one way road witht he guards chasing me down.  I think they realized it was pointless to add more salt in my wounds and let me go.
Well, now I'm worried that Shirley has been waiting outside the store for over 30 minutes and I'm making her wait.  I felt terrible.  Second time around I get on base without problems.  I did not see her outside so I thought maybe she waited inside.  As I cruise the isles up and down looking for Shirley I finally run into her in isle 10.  We have 12 isles.  WOW, 2.5 hours and she's only on isle 10.
I stood at the end of the isle and laughed at myself, my day, my thoughts about all that happened were all over the place.  I rushed everywhere, I became irritated, angry, almost in tears and in the end, all was well.  I even got my own shopping done. I figure I could get mine done while she made her way through the last two isles.  Sure enough, we left the store at the same time.
I try to put my own mother in her shoes and hope that if she ever needed help from someone, that they exhibit the same kindness, patience, and give her that listening ear people need to feel like they belong.   Shirley felt happy, in good company, and got all her shopping done, regardless of how I felt before, during, and after helping her.  Some things she didn't need to know.
I missed my swim lesson, we missed our date, however, our neighbors were having a cookout and invited us all over for dinner.  It was nice and it was fun.  I realized that I need to look for the rainbow after the storm..it's there and it's beautiful!
Posted by Unknown at 3:22 PM